Your first time on a bicycle/motorcycle

Joined 17 d ago
·
4 Posts
I was thinking that simply having experience in riding a bicycle will help me to ride a motorbike. I've just read about tips that you should know before starting to ride a motorcycle.
" Being experienced with the bicycle doesn't make you experienced with a motorcycle (they are both 2 wheels but are handled very different, mainly because of the ride's weight and speed). I underestimated the bike's weight and leaned too much while standing still, damn is it heavy. Also pushing the bike for the first time... when I looked at other people it seemed so easy but it is darn heavy.
However, being a bicycle rider, I somewhat knew what kind of stuff not to do, or at least to watch out for, while riding on 2 wheels. E.g. jamming the front brakes too hard, turning the handle too much, not leaning enough in a turn... that kind of stuff.
I'm not sure if it's because of my cycling experience but I found out keeping straight and balanced very easy. I believe this is because of the motorcycle's weight and speed/traction and has nothing to do with my previous bicycle riding. I might or might not be wrong, though. "
I'm interested in what people think about this. And whether you remember your first time on a bicycle/motorcycle. Does everybody was riding a bicycle first and then a motorcycle?

Joined Dec 16, 2020
·
359 Posts
Riding a bicycle goes a long way towards learning to ride a motorcycle, especially if you ride in a city. Anybody can ride a motorcycle on a big open empty highway. It’s trying to stay alive around four wheel vehicles that’s important. Plus riding bicycles gets your brain used to leaning, scanning and using your eyes.

A friend of mine introduced to a 28 year old guy who just bought his first motorcycle, a GSXR600. Because I often ride country back roads 200- 400 miles a day he thought it would be a good idea if I would let John ride along with me to get his feet wet. He assured me John is a responsible guy and would listen to me and ride respectfully.

Against my better judgement I agreed.

So I met John on his shiny brand new crotch rocket with less than 800 miles on it. He had all top quality gear including an Alpinestars one piece leather with matching race boots gloves and helmet. (He would need all of those that day but I’ll get to that in a minute).

I had brought my Kawasaki police bike since I knew I’d be just cruising all day.
I told John that just to follow me and follow my lines, if my police bike could do it his bike would have no problem.

So off we go to roads I’m well familiar with. Only but ten minutes later as I’m riding down a narrow road there was construction and it was closed so we had to make a U-turn. I turned no problem. As John turned he dropped his bike. I got off my bike and helped him pick up his bike. He was embarrassed saying the road was too narrow. But as I picked up his bike I noticed there were scrapes on the other side as well. Hmmm… he’s been here before.
And maybe an hour later, making a right turn from a stop, he dropped it again.

It was then I figured out that the guy had never ridden a bicycle as a kid. As soon as he had to make a tight low speed maneuver his brain got confused and down he went.

Long story short… He had improved after the first two crashes and a couple of hours later he rides up beside me and asks if I would pick up the pace. (I guess he felt ready for the big time). So I said "You’re probably sick of looking at my *** end so why don’t you take the lead".
ZOOM, off he went and blasted around the bend with me barely keeping up on my giant tank. Ten seconds later his bike is flipping end for end, body panels flying into the air, with him cartwheeling right behind it. He stopped one foot from a giant tree. He got lucky. I guess.

So we picked up all the pieces and with some rope and duct tape a woman gave us, I made his bike sound enough to limp home.
I told him he needed a riding course.
I never heard from him again. Which was fine by me.

So yeah, riding a bicycle helps.

If you’re new to riding, or if you’re experienced, here’s the best $50 bucks you can spend. I bought it and was pleasantly surprised at how much I learned and I’ve taken courses by pros and have been riding a long time. And it’s yours to review whenever you want. 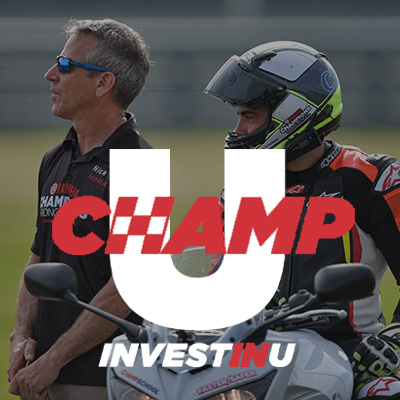 Welcome to ChampU, an intensive on-line school aimed at riders with a passion for motorcycling and a desire to improve, no matter where or what you ride.

Joined 17 d ago
·
4 Posts
I believe that riding a bicycle can help, at least in the beginning.
I'm about to purchase a motorcycle. When I took the motorbike basic course two months ago, one of the prerequisites was the ability to ride a bicycle. I just checked, and it's still listed in the prerequisites.
"Students must be able to balance and stabilize a two-wheeled motorcycle or bicycle. If a student has not ridden a bicycle or motorcycle in a long time, it is recommended that they practice riding a bicycle prior to class."

I know that in definite schools, when teaching the basic course, a bicycle is provided in case someone shows up and has to start from the beginning.